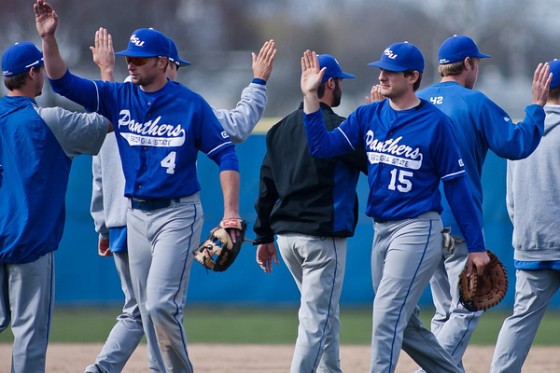 There are three definites in life: death, taxes and injuries in baseball. While you may have only heard about the first two before now, Bob Murphy, head athletic trainer at Georgia State University, can assure you that the third is also a rock-solid truth.

But Murphy and his NCAA colleagues aren’t taking that last statement sitting down. In fact, over the past decade or so, there have been philosophical changes to training and working out that many feel are helping baseball players excel on the field and stay off hospital beds.

“There seems to be more of a year-round approach to sports now,” says Murphy, who’s worked with GSU’s baseball team and its other sports since 2007. “Back when I started, there used to be pretty much an offseason where you didn’t do much. But now, athletes at the college level and up pretty much are participating in their sport year-round, which is good because it kind of keeps you in shape. We just have to watch and make sure they don’t overdo it too much with certain things.”

Another change Murphy’s noticed amongst his peers is with their mental switch from merely rehabilitating to now preventing injuries altogether. It’s with that mold of thinking that FUEL approached Murphy about three common baseball ailments to get the best advice on averting them in the first place.

Let’s start with the million-dollar question for guys on the mound: What’s the best approach to preventing as many shoulder issues as possible?

With pitchers, we are most concerned about the shoulder injuries. There are few things that they can do. One thing they do with the shoulder is they complete a total arm-strengthening program, which includes the rotator cuff muscles and the shoulder, the biceps, triceps, and then their forearm muscles as well. And they do various exercises to strengthen and build the endurance of those muscles, probably four to five times a week. You know, we kind of mix it up. We do different things on different days. But they are specifically working those shoulder muscles and those arm muscles, I would say, four to five times a week. And in the case of just the arm stuff, there is also the weight room where they are strengthening their lower body, where you usually get a lot of power from when you throw.

What are you doing specifically in the weight room?

We are doing a lot of core exercises, which strengthen the abdominal muscles and the low-back muscles, to give them the foundation and support, which allows them to essentially take some stress off the arm and give them more power from their body when they throw.

That makes perfect sense. It’s less stress on the arm, and kind of distributing it a little bit to other places.

Have you guys seen a decline in strains and tears?

I would like to think so. I think, no matter how much you do, if you look at any Major League Baseball roster, there is always going to be a guy with a shoulder problem, who has had surgery, or is about to have surgery. So, I don’t think they are all preventable, but I think between our staff and our doctors and our coaches, I think we are pretty satisfied that we are not getting rashes of injuries during the season that really hurt. You can’t prevent all of them, but I think we are preventing more than we’re seeing, that’s for sure.

Joints tend to tighten over the winter. What kinds of ways do you combat ankle ailments during the offseason?

Well, NCAA rules allow the athletes to essentially participate in their sport for eight hours per week in the offseason when they are not playing the game. So, our student athletes are expected to participate in all the allowable activities that we have, and that includes participating in their sports, practice and weightlifting and doing any kind of conditioning or anything along those lines. Then from a medical standpoint, of course, if they get hurt, they can come in and we do their treatment and rehab. But if they aren’t doing anything to prevent injuries, like various forms of stretching or strengthening exercise, we try to improve that during either their weightlifting or during practice or times when they are pretty much in the mix of their sport.

The ankle takes out a lot of good players as well, with slides and such. With the lower body, are there any specific kinds of things that you do to kind of help strengthen that area?

It is as much a part of their overall weightlifting program. Our guys do some exercises that are single-leg. Like, they’ll do single-leg squats or they’ll do some balance exercises on almost like a foam pad or an unstable surface. That’s a good way to prevent ankle injuries and strengthening the ankle, as well as the knee. It helps the hip as well. So, we try to address the prevention of those types of injuries in our total-body weightlifting program that they guys go through.

Wrist injuries are the other head scratcher. Every season it seems to take out good players.

Yes, we’ve got guys with wrist injuries, which can be somewhat troublesome throughout the year. It’s just overuse from years and years of them playing baseball and swinging the bat and throwing the ball and sliding, sliding headfirst, and jamming their wrists. You know, some guys start to get some overuse sprains or strains in their wrists and then they start to show some very early signs of arthritis in their wrists. So that’s kind of something we see every couple years, a guy will come up with a sore wrist and then it’ll bother them kind of on and off throughout the year.

So, what can coaches and players do about the nagging wrist problems?

We try to address that by doing some wrist-strengthening exercises as part of their weight training. We also have a rice bucket, and a couple of paint buckets full of rice, and guys get in there and dig through the rice and increase their grip strength. This helps strengthen those muscles that surround the wrist and keeps them nice and strong.