With movies like The Bourne Legacy and The Expendables 2 releasing, August is ripe with glossy flicks to entice the action lover in your home. For Total Recall to get its piece of the testosterone-stuffed pie, producers hope three things work in their favor: Colin Farrell, nostalgia and cool special effects. Seeing as how Farrell’s one of Hollywood’s most overrated names (the last three movies he’s headlined, Fright Night, Pride & Glory and In Bruges, grossed a combined $41.8 million), we’ll just cross that first one out now. As for nostalgia, this reboot to the ’90 cult sci-fi fave starring Arnold Schwarzenegger has many of the original’s beloved elements: unbelievable cars, three-breasted chicks and a central story about a possible spy (Farrell) who can’t differentiate dreams from memories after visiting a mind-manipulating bar. The new Recall does stray from the first version by skipping the trip to Mars. It stays on an Earth divided into two sections: the flourishing United Federation of Britain and the crumbling Colony. But don’t worry about the original’s campiness being swapped for deep social messaging this time. Director Len Wiseman (Live Free or Die Hard) only hints at anything of heft; instead, he tries to captivate with busy fight sequences. He’ll accomplish his goal on two occasions –There’s a rapid-fire chase scene with some sliding elevators and a rather unique shootout at zero gravity- but mostly, there’s just a lot of clunky dialogue and running around on The Matrix Reloaded backlot. Kate Beckinsale and Jessica Biel, who literally fight for Farrell’s attention a third of the movie, are easy on the eye, but, ultimately, they’re unable to make Total Recall producers’ dreams of a fantasy winner much of a reality either. (C)

10 Athletes the World Should Be Watching in London 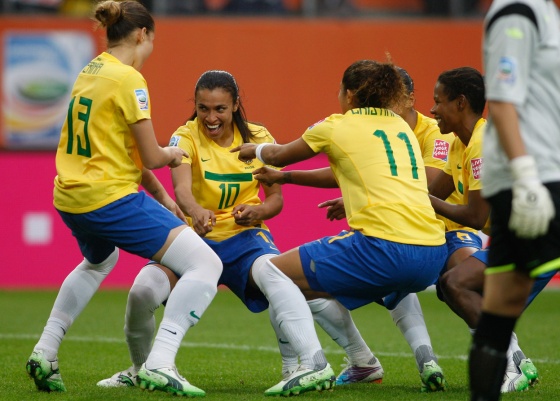 Few events attract the eyes of the entire world like the Summer Olympics. Beginning Friday, July 27, every moment of the 2012 Summer Olympics in London will be shown live on NBC’s family of networks and its website. For those counting at home, that’s some 5,535 hours of coverage. Over 17 exciting days, familiar sports icons like LeBron James and Usain Bolt will be heard time and again. But for every Michael Phelps and Serena Williams, there are literally thousands of other athletes around the globe with amazing talents and fascinating stories to share (including Brazilian soccer sensation Marta). Here are 10 largely unknown Olympic athletes we’ll be keeping up with over the spirited weeks ahead in London, as well as a guide to the best times to see them each in action.