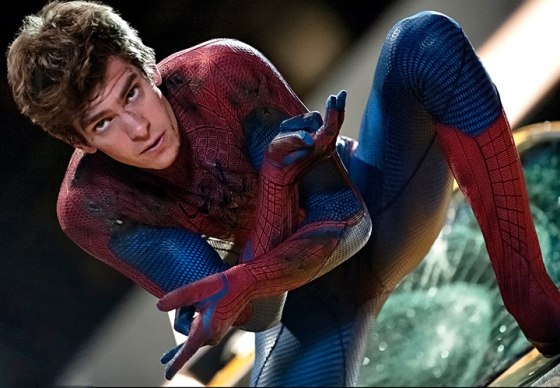 In the last Spider-Man movie series, Tobey Maguire was great as the awkward Peter Parker, fawning over Mary Jane Watson and delivering pizzas. In this take, Andrew Garfield (The Social Network) is awkward for about five minutes in a high school hallway–director Mark Webb must have looked at some footage and realized Garfield was too handsome to pull the shtick off for a whole movie– but quickly turns into this camera-wielding, skateboard-riding mystery who defends fellow students from bullies. But fanboys will appreciate the fact that Parker’s high school crush, Gwen Stacy (Emma Stone), is really his first crush from the Marvel comics. Of course, in between saving kids from cafeteria torture and staring at pictures of Gwen, Peter’s waging an internal struggle with the loss of his father, scientist Richard Parker. His uncle (Martin Sheen) and aunt (Sally Field) give Peter love, just not the answers he seeks. But a mysterious briefcase shows up in the basement, and its contents lead to Oscorp, an ambitious research outfit led by Richard’s old partner, Dr. Curt Connors (Rhys Ifans). As you know, Peter goes snooping around the building and ends up bitten by an atomic arachnid. Scenes where Parker acclimates to his newfound powers, especially one cool moment on the train, are pretty special. In fact, Peter’s early fights against street thugs and his quiet spells with Gwen almost leave you questioning your loyalty to Tobey. It’s only when Dr. Connors’ screen time increases that this new version loses something. We know the doc wants to re-generate his missing limb, but why does he want to take out his frustrations on New York, too? We realize his failed experiment changes him into Lizard, but why does his alter ego have to look like something out of The Dark Crystal? We see the rotten reptile and Spidey get into a knock-down, drag-out at the school, so how does the place appear immaculate just a few scenes later? Not really sure. All we’re certain of is that the web-slinger’s flights are awesome. The behind-the-mask action shots are dynamic. The lovebirds’ chemistry is evident. But as a franchise reboot, there’s just not enough about this Spider-Man for it to be considered truly amazing. (B-)